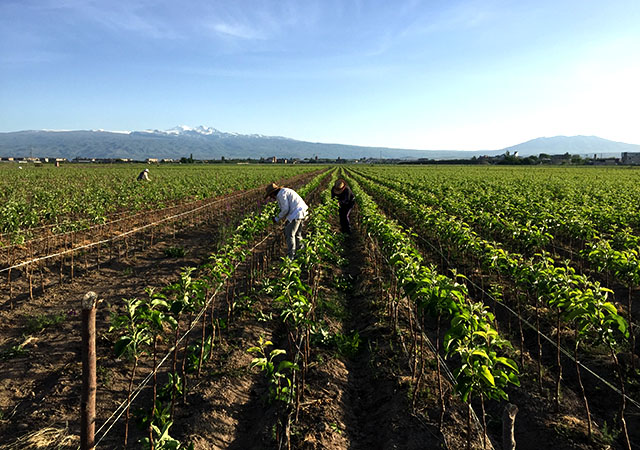 
“Noratunk” CJSC is the first leading science-based company specialized in the production of planting materials in Armenia. The company was established in 2003 aiming to organize the local production of fruit trees and development of horticulture in Armenia. Due to introduction of modern technologies, the company has recorded stable growth during recent years.

The landmark of “Noratunk” is high density orchards: dwarf fruit trees and rootstocks production, creation of orchards and installation of relevant equipment, such as anti-hail nets, frost protection, rodent control and drip irrigation systems, breeding of new varieties of fruit trees, import of best and most known varieties with high market demand, variety testing. In this field the company is the leading one in Armenia, and the founder of the Company is the candidate of sciences Hovik Hovannisyan, one of the few specialists of high density orchards, who effectively uses scientific research alongside with practice experience. He is a member of Executive Committee of International Society of Horticultural Sciences.


Creation of High density gardens in various regions of Armenia


The first apple high-density orchard was established by the “Noratunk” way back in 2006 in Arinj village of Kotayk region (province). Due to the efforts of “Noratunk” the area of high density orchards in the Republic is gradually expanding in the country, and now high density apple orchard is being established on the 50 hectares of the Kotayk region.

The company has an open-air fruit nurseries in Ararat valley, Edzmiadzin, Artashat and there is a mother orchard for dwarf rootstocks in Arzakan. Due to the company's high quality planting materials a number of orchards have been established in almost whole territory of Armenia: Artashat, Armavir, Kotayk, Vayots Dzor, Tavush, and Lori regions. Collaboration with European research institutions and plant nurseries (France, Italy, Holland, Belgium, Germany, Greece, Spain, Hungary, Poland, and Slovakia) has enabled the “Noratunk” to continually follow trends in this industry, to bring and test new varieties of fruit trees into Armenia and modern technologies of rootstocks production, to apply and achieve unprecedented high results.


“Noratunk” has also the experience of export of planting material (China, India, Thailand, Russia, Syria, Greece, and France). At the same time “Noratunk” CJSC is one of the founders of Association of Fruit Nurseries of the Republic of Armenia, which was created with the purpose to elucidate, teach and consult high-density orchards development idea and principles.